At my Guinness World Record Attempt a couple weeks ago, Michael Mentz, a Journo at the New Age newspaper, mentioned he’d love to get rid of his Journo eating-habits for a month and try his hand at braaing every day.

At first I thought he’d just been drinking too much, but promised I’d help out with a few tips etc. anyway. True as nuts though, right after my record attempt he got in touch and wanted to make it happen.

The idea was simple: He would braai every day in September, and I would give him some random tips/advice every day to make it easier.

What I didn’t bargain on though was that he was going to be taking on his adventure on a rusty old braai. Admittedly, it had a lot of character, but if he wasn’t going to hate life after 30 days of braaing, we were going to have to make a plan, and fortunately the guys at Megamaster agreed to pimp his old braai. In fact, the sommer replaced it with a brand new one.

The end result was one really happy camper, and a fun night! 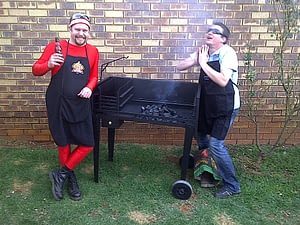 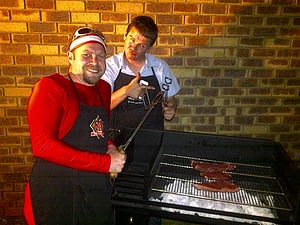 Don’t tell them I said this, but both these okes should stick to their Journo careers – as entertaining as a little acoustic session after a lekker braai can be, I don’t think either of these two will ever make it into a band.

I’d love to hear your comments below, or you can always give me a shout on twitter or facebook.

What makes the Perfect Braai?